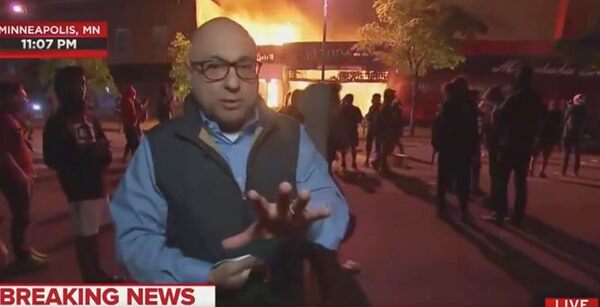 by   is licensed under
An MSNBC reporter claimed on Thursday night that riots against police in Minneapolis were "not generally speaking unruly" while flames could be seen engulfing a building behind him.

"I want to be clear on how I characterize this. This is mostly a protest. It is not generally speaking unruly, but fires have been started, and this crowd is relishing that," said Ali Velshi, who was reporting live from the Twin Cities.

"There is a deep sense of grievance and complaint here, and that is the thing. That when you discount people who are doing things to public property that they shouldn't be doing, it does have to be understood that this city has got, for the last several years, an issue with police, and it's got a real sense of the deep sense of grievance of inequality."

As Velshi downplayed the destruction, a liquor store and a smoke shop burned in the background. Velshi's characterization of the riots was widely mocked by conservatives on Twitter.

MSNBC reporter just now: "I want to be clear on how I characterize this. This is mostly a protest. It is not generally speaking unruly."

The guy is literally standing in front of a burning building in the middle of a riot. pic.twitter.com/IzCV6On4sF

Some noted that MSNBC's parent company, NBC, has apparently prohibited reporters from describing the unrest in Minneapolis as "riots."

Why they're rioting: Thursday was the second night of looting and arson in Minneapolis after three days of protests over the death of George Floyd, a black man, in police custody on Monday.  Earlier on Thursday, tens of thousands of protesters in Minnesota and nationwide demanded that four now-fired officers from the Third Precinct be arrested for their handling of the arrest.  But protesters' anger was seemingly fueled by Minnesota prosecutors' announcement that they had not decided whether to charge the officers involved in Floyd's arrest.  In a late-night tweet, Trump condemned the Minneapolis rioters as "THUGS" and warned that "when the looting starts, the shooting starts" — leading to an escalation of his feud with Twitter. Frey rejected the criticism at a press conference early Friday morning.  Democratic Minnesota Gov. Tim Walz, echoing comments by Frey the previous day, expressed understanding toward the rioters even as he pleaded for a restoration of law and order.

“The ashes are symbolic of years and generations of pain, of anguish,” Walz said at an afternoon briefing, referring to the dozens of Minneapolis arsons this week and a history of racist policing, respectively.
by   is licensed under